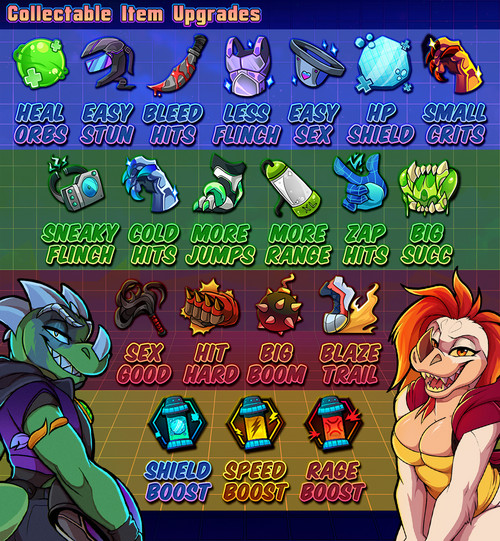 We're back with a mid-month patch build and a breakdown of all the released and unreleased chest reward upgrades in the game!

[Common] items are small buffs that can help give you a slight edge while brawling. They spawn most frequently from chests with a 60% drop rate.

• Heal Orbs: Kills have a 5% chance to drop green orbs somewhat near the enemy that when picked up, restore 1 block of clothing. Orbs disappear after 6 seconds.

• Easy Stun: Reduces difficulty of stun minigame 15%, speeding up the rate in which the escape window expands.

• Easy S*x: Reduces difficulty of s*x minigame 15%, making it slower and the window to escape bigger.

• HP Shield: Grants a bonus block of temporary armor that regenerates after successfully escaping a sex scene and/or respawning. Indicated by a large blue sphere around the player.

[Uncommon] items change the game in more dramatic ways and can greatly power up your character when certain synergies combine. They spawn less frequently from chests with a 26% drop rate.

• Sneaky Flinch: Taking damage has a 10% chance of making the player invisible, causing nearby enemies to stop attacking and lose interest for 5 seconds. Enemies will regain aggro on the player if they are hit.

• Cold Hits: Attacks have a 20% chance to slow enemies projectiles, movement and attack animations 50% for 4 seconds and dealing light damage.

[Rare] items are overpowered game breakers causing rampant chaos. Collect at your own risk! They have the lowest chance to appear in chests at 14%, but you can trade your other items at NPC merchants to get one early in your run.

• Sex Good: 20% chance to fully restore health after failing a sex scene instead of losing a life.

[Vials] are temporary buffs you can find scattered across levels. They don't appear often so grab them while you can for a quick boost of power!

• Shield Boost: Temporary version of the shield buff that does not regenerate once lost.

• Speed Boost: All movement and attack speed is increased 100%. Expires after 45 seconds or if stunned.

• Rage Boost: All damage is increased 50%. Expires after 45 seconds or if stunned.

• Added NPC Merchant to stages (Spawns once a stage, starting at 15% chance and goes up every module, guaranteed by the end of a level)

• Snu-Snu Snake now immediately goes into s*x scene if she pulls you in with her consent beam attack.

• Added 25% chance to not play voicelines

• Fixed Piranha Plants not attacking when standing too close

• Fixed looping flying/burning sounds stacking and not decaying with distance

• Fixed portal not taking you to the next level

• Added Leon to the gallery (Considered the same category as Kane)

• Added debree to crates and barrels when they take damage

• Updated impact sounds with crunchier ones

• Updated back button on character select with new art

Now that NPCs are working, we plan to have an early version of Jade playable in July!

New content is super exciting, but not when you can't get to it

i m seeing so much errors problems all around but i dont have any lucky me i guess ?

any hint when we will see the other characters ?

I am currently working on the Jade release we are getting really close, but I have no idea what the estimated time is as not all of the frames have been drawn yet.

sorry for my delay i dont get any notification anyways

thanks for the awnser and well i wish you luck

the problem is that it must be that there are many objects that are loaded at once, but if you need to optimize you must do it, it is not a bad video game, but you must optimize certain things, I did once with my video game "useless dragon", I put so many objects that when loading them they broke down

I'm getting tons of game crashes as well as the Hornet's audio (I believe) loops sometimes and won't stop until you completely close the game due to it still playing in the menu as well.

I cant install the game

When I enter the Gym and chose a training session, the screen goes black.

Thanks for the bug report I will add that to my list. Hopefully it's an easy fix

game crashes everytime a submission pose is supposed to happen

when will we be able to play as jade

I'm working on the animations for Jade right now. After they are done we will still need to created the custom logic for her characters attacks.

Enemies still spawn behind the boundries. It's not fixed.