This month we have our followup to the cross promo with IntiMate by Vitki, as well as a bunch of new content to flesh out our combat system, collectibles and s*x scene!

Head on over to the Debug stage to meet a cute male bunny playing Virtual Reality! He'll give you some tips on how to use the enemy spawners and some lore tips as to how Kane  has a pocket digital dimension behind his gym. Spoilers, it's just a VR headset!

All stages are now packed with spinning Jasonafex emblems that you can collect in chains to produce a satisfying explosion of sound, dazzle and points! Collect more than 10 in a small time frame to maximize the point multiplier and increase your reward!

Input: Down + Attack while in the air

Verge launches ass first to pound any enemies beneath him. Be careful not to hit the ground or you may be feeling tender in the morning!

Input: Down + Attack while in the air
Gen coils up and spirals through the air, hitting enemies multiple times on the way down! Can be held to extend the amount of spins before hitting the ground.

Input: Up + Attack while standing or in the air Verge can cancel his normal combo string into an uppercut that launches enemies skyward for airborne followups! Can be used again after a jump to juggle.

Replaces Gen's old combo ender (Flip kick, now assigned to up+attack). Gen winds up and then unleashes a devastating blow that knocks enemies to the ground!

Replaces crouch slide for both characters (Now assigned to down + dash or diagonal down + attack). This offers a quicker option for swatting low enemies that can be changed into combos to extend your damage! 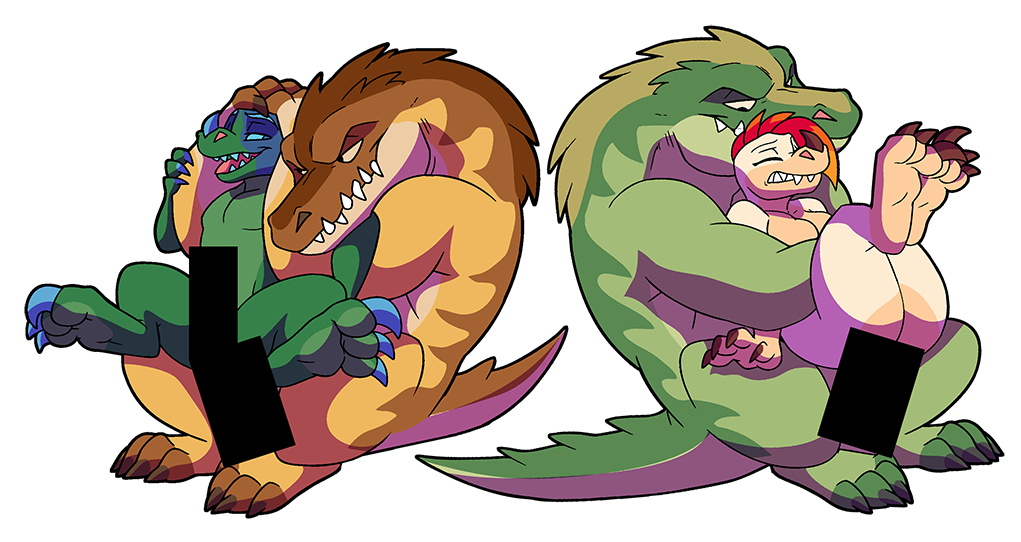 Our big gator friend chicken wings the player from behind and serves them up a plate of knotted pleasure! Fast variant traps the arms for a rapid plapping pounding. Find all these new animations ingame and in the gallery!

Star of Double Trouble and Bounty Hunter in training, Jade the sabre cat has edged out Mortred and Baxter by 10 votes to make her the newest addition to the playable roster! We have moved into full swing to animate her moveset. Due to the amount of art we'll need to make for her update, it may take us more than the usual monthly update rotation to have her finished. We will release a smaller update next month while we work away at her big reveal!

Will the other characters ever be playable without patreon?