This  month we have added a flurry of fun effects powers and butt pumellings! Destroying  crates/barrels will now occasionally drop additional types of vials beyond the simple green ones which restore health.

Doubling Down on Damage!

Picking up red vials increase all outgoing and incoming damage by 200% until you are stunned. This buff can make taking out enemies a breeze but be careful, some enemies may be able to take you down in just one decisive strike! Rage is a double edged sword of wanton destruction, use it wisely!

Pick up a yellow vial to double both your attack and movement speed for 30 seconds! Blitz down crowds of enemies or run circles around them with your extreme agility! You can still lose this effect early if your knocked down, so don't get caught!

Pick up blue vials to totally disregard all incoming attacks! Watch out though as your new bubble friend can pop after receiving too much damage. Shield health counts as a secondary health bar and will protect your clothing (and your butt) until it bursts.

More BOOM  for your buck!

All power attacks have had a visual upgrade to punch up the crunch and impact of each devastating blow. Knocking down and enemy is now accompanied with a dramatic screen shake, pause and speed line effects to really sell that oomph!

Several new animations have been added to general movement to further polish the visuals of the game.  Over time, more particle effects will be replaced with hand-drawn animation to further harmonize our art style! 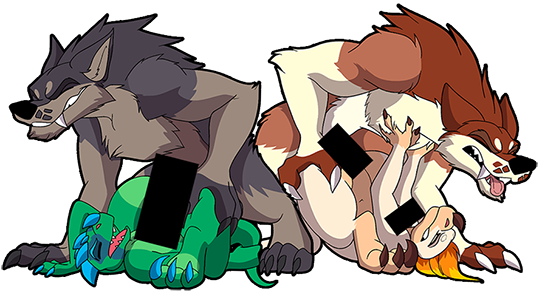 Wrestle with your furry enemy friends in a whole new way! As an added treat to our free demo players, Hornet Scene B has been added to the public build.

Sprites for Vergence, Genesis, Werewolf and Huntress have been cleaned up and no longer have any pixel bleed issues. This was a side-effect of mixing motion tween layers with frame by frame in our earlier animations which lead to some visual artifacts converting vectors to sprites. The remaining enemies will be cleaned up in a similar fashion in the next update!